An addon for the Duke3d 1.3 version of the Platoon TC.

If you use eduke32 to play Platoon, don't use the included bat. You won't get a proper episode option in the game menu. Put the files in your Platoon folder, launch eduke32, and then select the third episode.
An eight level episode that expands on the original; this addition adds new and larger levels. The basic techniques are the same, but most maps are linear corridors that widen and narrow dramatically at several points instead of fairly large swaths cut in sweeping lines through the jungle foliage.
Typical areas are present such as; jungles, swamps, villages, enemy camps, rabbit holes and tunnels, and a small city, but there's also an airfield and a few other neat additional sites to add to the variety.
Construction is a bit more in depth than the original with more prominent trees, hills, bridges, and water based architectural structures. Also making an appearance is a jeep ride and a few helicopter repelling drops.
Unfortunately the airfield map is quite buggy with weird texture clipping issues and distracting parallaxing oddities. It doesn't halt progression or totally kill the map, but enemies can clip in and out of sight making combat just a little more difficult.

Game play is the same as the original: fight and survive. There are two button puzzles for the entire episode. Find and activate all the radios at the airfield to open the HQ building, and in the last level there's a three button puzzle that must be shot at through a large window in order to unlock the door into the VC leader's bunker.
What's missing from this addon that is desperately missed are the call for fire radios and the triggered airstrikes. Both are very rare and are only done for ambient effect. They have no bearing on the game as they're strategically placed to hit away from any enemy forces. And the enemy forces are practically piled on top of each other.
The maps are larger so maybe the author thought they could hold more enemies.
Alot more enemies. Alot lot more enemies. After the first couple maps several levels become ridiculous. As opposed to the original there are tons of supplies, weapons, and health laying everywhere, and you practically need every bit of it. After a few levels of this it gets pretty tedious pretty fast. If you can tough through it to the last map it's worth it.
A decent looking city with and open layout, and streets that contain well-placed and balanced opposing forces.
This episode is tough from start to finish. Save often. As a whole the project is aesthetically pleasing, but the game play is fatiguing at times. 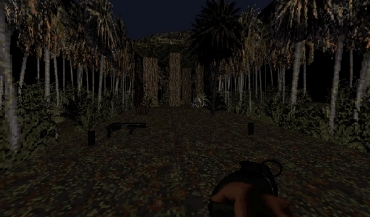 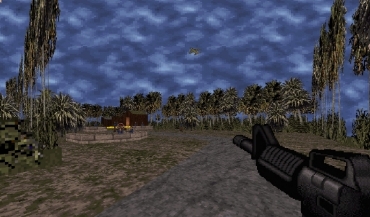 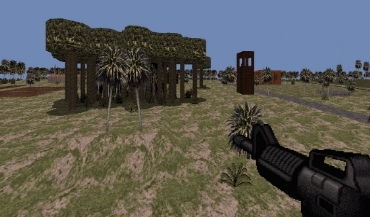 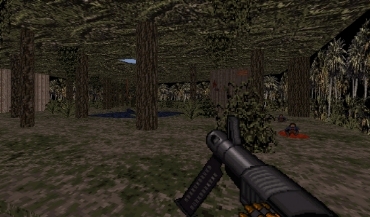