Mainly a Dukematch level re-purposed to accommodate single-player; the floor-plan is pretty wide open, but there are a few issues if this is going to be taken on solo.
Don't go down into the sewer without finding the jetpak first. There's no way out except to die. Secondly, the one key in the map is really annoying to locate. Even though this map is pretty small, unless you get lucky, you'll end up exploring, and re-exploring, and re-exploring again every inch it. You'll flush quite a bit of your time down the toilet. Let that sink in.
Aside from the sewer and central plaza, it's three apartment buildings and a bank. Each building is only a few rooms deep, so there's not a lot of territory to cover, but it keeps Dukematch duelers in close quarters.
Design-wise this level is okay. The architecture is pretty solid except for a couple cramped door-ways. The detailing, as well as the shading, are pretty basic, but adequate.
For the single-player aspect, it's survival for the initial portion as the map is packed with aliens, but very few readily available weapons and health. Once that central plaza is cleared and a couple extra guns are found, it's pretty simple to isolate and pick off the rest of the foes.
More fun than a pencil sharpener. 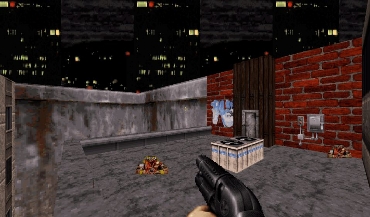 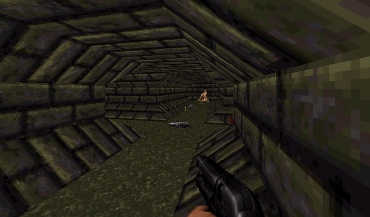 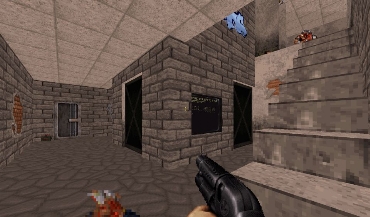 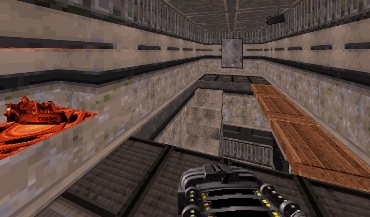 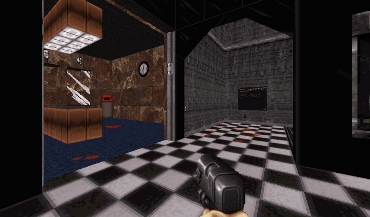 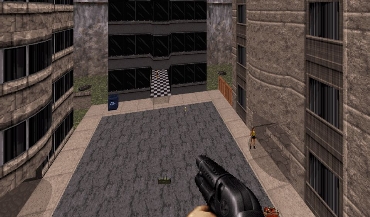