Aliens have taken over the city and thrown up barriers so there's no escape.
Or is there? You must move through the city and find the switch to lower the barriers. After that you need to battle through to the aliens drop zone and (presumably) take out their landing craft.

A pretty straight forward medium sized city map. Well detailed and textured with a good amount of evenly placed sprite work.
The layout is pretty simple with linear game play in areas ranging from wide streets and plazas to corridors and rooms inside buildings.
There's only two buildings in the map that have any amount of interior work done to them. Although one of the buildings has a somewhat extensive network of rooms to it, I think with the quality of work produced by this mapper, the presence of another building or two with interior work would have been greatly appreciated by this player.
The author took the time to set up visible barriers and fences. Arcitecture is basic and shading seemed to be missing in some outdoor areas. The alley with the docking ramp has shading, but none of the other buildings on that side of the street do.
At the begining of the map you are able to see other parts of city blocks across the barriers. Once you move into the map where the majority of the game takes place it seems that the ambience was confining and left a minimal impression of being part of a larger city instead of just a city block.

The majority of game play difficulty is average. Although it does get easier towards the end.
Most weapons are available and the more powerfull weapons become available towards the end making the battle with the mini-battle lords, commanders, and the large spawning in the plaza relatively easy.
Health and ammo are adequate and evenly spaced around the map.
The majority of the enemy encountered are: troopers, pig cops, and enforcers, with a few octabrains and protector drones tossed in for good measure, all of which are strategically well placed.
There are a couple of situations in which barreling into an area or room can get you into trouble. Unless you enjoy a pig cop or two blasting you from different directions and little cover to duck behind.

The button puzzle in the restaurant to lift the barriers presented no difficulties, but locating them was a bit tricky. One of the buttons is nicely hidden but not impossible to find.
I recommend this to anyone who likes city maps. Nice looking and a decent play. 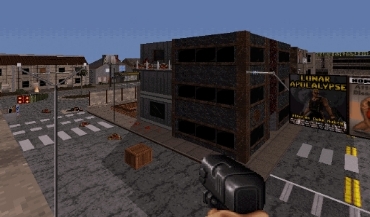 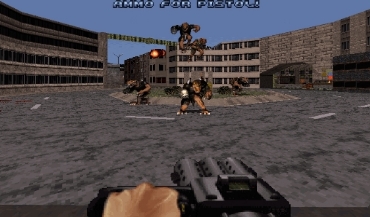 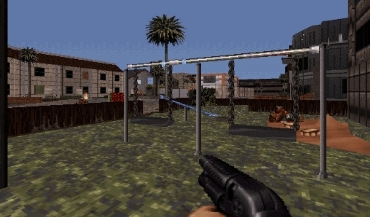 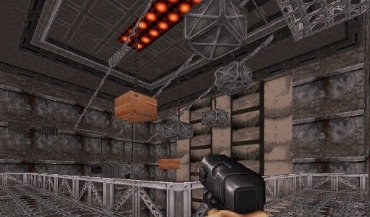 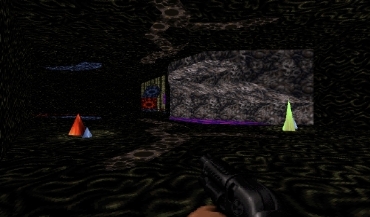 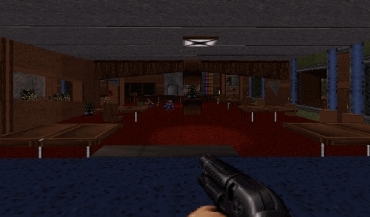