The series starts at a resort hotel that's been over run with aliens. Duke must find the source of the invasion and put a stop to it. Damn, Duke never gets a break.
A medium sized map themed around exploring the hotel and finding a path that leads to the source of the alien's entry point. The layout is simple with many small to medium rooms and corridors. There are also a few outdoor and pool areas. The detailing and architecture are simple and the texturing, shading, and sprite work are pretty basic.
Game play is loaded with fire fights as you explore the hotel. Stacks of troopers, pig cops, and enforcers are just waiting to meet your acquaintance. There's plenty of ammunition and health to keep the aliens at bay.

At the back of the hotel Duke enters a labyrinth of tunnels and caves that ends at a temple. The layout is more complex than the first episode but there's no danger of getting lost. Shading and sprite work are better in this map, the water gates and ribbing in some of the passages are of nice design, but everything else of visual nature is still pretty basic.
The body count mounts from the stacks of aliens guarding the temple and the path to it. There's lots of ammo and health to keep Duke in the fight. A secret level can be reached from here.

Starting out in the tunnels under the hotel, Duke must fight his way out of the passages, through a store and a bar, all the way to the back of the hotel.
Another plain looking map with minimal shading and detailing. Texturing and architecture are basic and sprite work is limited. The layout is simple but there are a few optional routes that can be taken consisting of mainly air vents.
The theme is based around just surviving through the gauntlets of enforcers, newbeasts, and pig cop tanks to reach the exit. Ammunition and health are very limited making this map of slug fests a bit on the difficult side.

Duke begins behind the hotel and must make his way past the beach and back through the casino portion of the resort.
Another rather plain looking map with everything done in the standard method.
There are a few hidden switches that must be found in order to open the doors. The body bags just keep filling up. This map is loaded with octabrains and commanders with plenty of troopers and pig cops to keep you company. Loads of ammo and health keep Duke in the fight.

From the starting hub behind the hotel Duke must make his way through the market square and clean out the alien infestation.
A large map with a layout and design that is pretty standard. Shading is again touch and go. Some of the textures are good, some not so much. Troopers, pig cops, enforcers, commanders, and mini-battle lords abound in this map. A slug fest almost the entire way without a break. Ammo and health get a bit tight but there's just enough to get by on. The theme in this episode is the key locked doors.

Once again starting from the hub behind the hotel duke must make his way through the jungle like atmosphere to reach the exit.
One of the more elaborate layouts of this series, it's a canyon full of caves and tunnels. The advantage is there's more to explore, the disadvantage is that you can by-pass a large portion of the map to reach the exit. The sprite work and shading are better than average and there's some nice architecture work.
The map is loaded with aliens that are practically standing on top of each other to get to you. There's tons of ammo, but health is pretty tight which makes this a slightly more difficult episode to complete.

The majority of this takes place in an amusement park.
The most detailed and best looking map so far. Shading and texturing are better than the rest, the sprite work is well done and the detailing is the best so far. A nice layout and design with some good architecture work as well.
The body count is one of the lowest so far and there's tons of ammunition and health everywhere.

The episode takes place in the corridors of an arena and cumulates with a final battle on the field.
The layout and design is the simplest of the entire game. Texturing and shading are average but there's no real detailing, architecture work or sprite work worth mentioning.
The least amount of fighting also takes place on this level, quite a few commanders, enforcers, and mini-battle lords. The fights are easy and you mainly fight a few baddies to get to the stock piles of health, atomic health and heavy ammo in preparation for the last battle.
The fight with the cycloid emperor is not very difficult, you're loaded down with ammo and health and there's a few locations where tactical advantage is easy to obtain.

The theme of the maps fluctuates dramatically from a resort hotel to an outdoor jungle valley/cave atmosphere.
It seems that the author was inspired two separate times to make two separate maps and concluded that he wanted to split them all up and them sew them back together. While not seamless the sum of the whole fits together well.
Detailing, shading, sprite work, and texturing were generally overlooked. There are some nice architectural works, but those are few and far in between. The layouts are large of and of decent design and fit the theme of endless fire fights.
This is definitely for those who prefer the "less puzzles, more shooting" styled game play 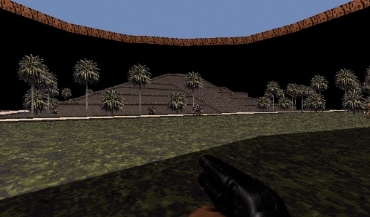 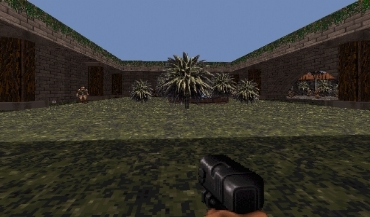 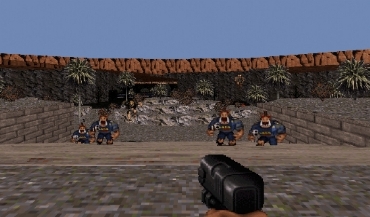 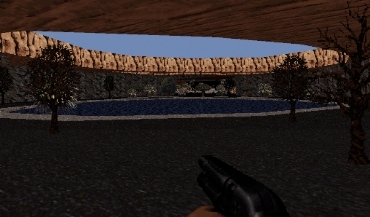 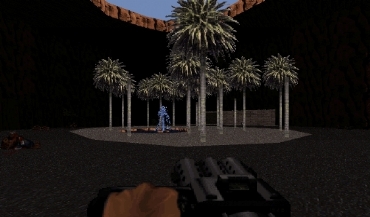 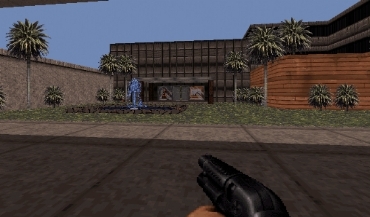