An industrial chemical plant.
Some of the construction techniques are pretty amazing, like the visible room over room and sector over sector areas.
While the texture combinations and shading are well done for the most part, some areas are bland in those aspects and also lack trimming.
The most brutal aspect of this map is it's a confusing mess. I would call it open linear; the section between the two main outdoor areas basically runs in what seems like a never ending forward progressing path, but there are a lot of rooms and corridors that fork off, go nowhere and seem to serve no real purpose other than to get the player lost.
Add to this the multiple pits in the floor that drop into underwater tunnels. Some of these need to be entered to throw a switch, others make the player go half way back across the map and start over. Several newly opened portals seem to lead back to earlier sections of the level and just add to the confusion.
Another aspect compounding the seemingly futile effort to figure out what is going on is when a good number of the buttons and switches don't really seem to be doing anything at all. I'm sure they do something, but it's probably way on the other side of the map.
Some of the other problems in this level is it's quite easy to get caught or locked in a water shaft, room, or hallway with absolutely no way out other than cheating or restarting.

The premise of the level is to explore it and find all the valves, or at least the ones needed to keep the toxic waste facility from being destroyed, and catch the attention of the big boss.
Take your time and look closely in every room; quite a few switches and buttons are placed above and below normal eye level. They're not hidden or camouflaged, but they are easily missed if not looking in the right direction.
Some buttons, and fire extinguishers that need to be detonated, are also placed on the other side of grates or out of reach requiring the player to notice and shoot them.
This map is hard and frustrating; all I can say is pick a direction and go with it.
Once you find the second yellow key card make your way back to the lower outdoor street section for the rest of the keys.
There are two blue keys; one will reward you with a devastator, but other than acquiring that weapon isn't necessary to use since the buttons that lock is securing can be shot through the grate.
The other blue key needs to be used on the three lock panel. Now figure out how to reach the panel with the three colored locks. Improvise if necessary. Go back to the underwater section with the three exit holes. Go to the hole on the left, figure out the pipe bomb puzzle, and then go back to the start area.
Good luck. 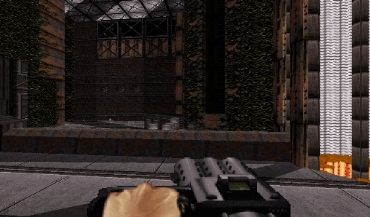 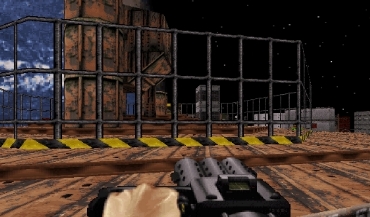 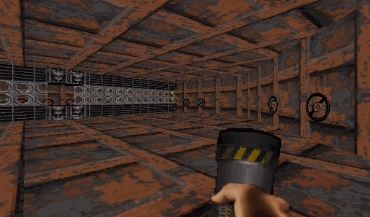 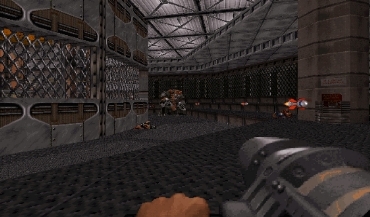 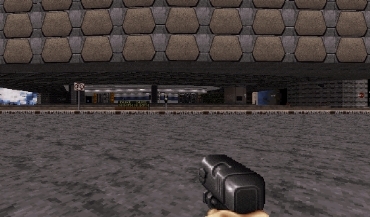 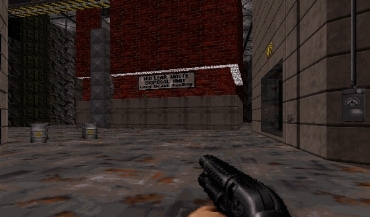