A shopping mall styled map.
The name is a little misleading; it's a mall, but there are no zombies. As with most maps of this style the locations are very typical: a toy store, grocery mart, bank, post office, electronics store, clothing store, and the rest of the usual shops.
The level starts in the parking lot outside of the building, but once inside there are only a couple skylights to let the player feel that they're not in a cave. This shouldn't cause any claustrophobia due to construction techniques since most shops consist of very large rooms with very little items in them. The drawback is this creates a very devoid and empty atmosphere with scant detailing and minimal architecture.
Some odd texture choices, just about every room is full bright, what little shading there is seems off and oddly done, and almost no ambient sounds enhances this feeling of being very plain and ordinary.
The map consists of four floors. In each floor is an unobstructed plaza lined with shops that are all open for exploration. The first three floors have a locked elevator which allows access to the next level.

Game play is a key card hunt. The keys are randomly hid in one of the shops. There are no puzzles to solve or tricks required to get into any of the shops.
The ending of the level is very anti-climactic. There's an exit button on a wall at the far end of the top floor plaza. The entire top floor can be by-passed and the player may go practically unhindered directly to the exit, though i recommend visiting each store just for the additional fire fights and to have a quick look around.
In theory the player can walk into the correct shop on each level, acquire the key, repeat for each floor until the top level is gained, then go straight to the nuke button.
Fire fights aren't very dangerous. Alien variety is limited, but the arsenal is not. There's more than enough health and ammo to ensure an easy experience. 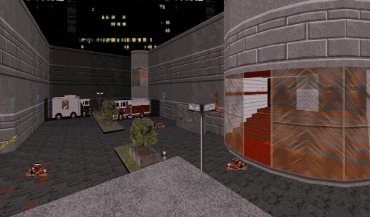 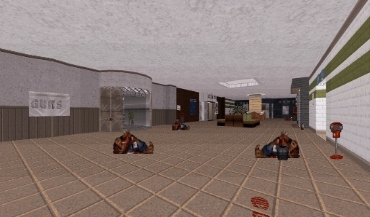 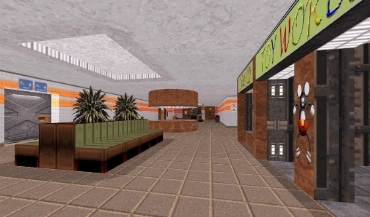 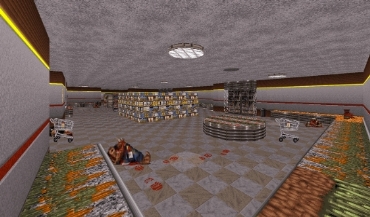 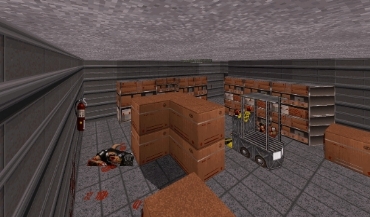 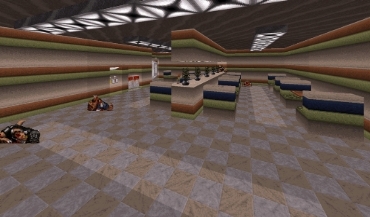