Duke Nukem 3D is well known for it's simulation of real life locations, in a time where most FPS games were just abstract mazes. A lot of user mappers took this idea even further and started recreating monuments, castles and even whole city blocks. Authors like Pascal Rouaud and Ck3d are well known for translating European architecture to the build engine and pushing the enveloppe. Now Maarten has taken the next step by recreating an entire town and its surroundings. This whole map tries to replicate the city of Woudrichem, a real historic place in The Netherlands. The result is a very ambitious and remarkable map.

The map starts outside the city and lets the player circle the place first. This is a nice way to introduce the player to this world and give them an idea of the general geography of the area. Enemy encounters are built up in a similar fashion, starting off slow but becoming more intense as the players progresses. Once the city is unlocked, the map becomes more unlinear. The player has to hunt down 3 keys and has the freedom to decide in which order to get them. The entire city is ripe for exploration, and there are hidden goodies everywhere. Even most of the rooftops are accessible, resulting in some enjoyable parkour.

Throughout the city, there are a lot of historic Dutch buildings to be admired, and there are a lot of fun little details. For example, there's a playground with some creative usage of sprites. There's even a little nod to E1L1 (you know it when you see it). But it's the sight of the whole city on screen at the same time that's the most impressive thing about this map. The hunt for keys will frequently take you from indoor sections to the top of a building and the sight alone is worth it.

Gameplay-wise, there's quite a lot of enemies to deal with. A surprisingly high amount of recon patrol vehicles and pig cop tanks patrol the area, combined with lurking assault troopers and fat commanders. But Maarten is always pretty generous when it comes to ammo and health and this map is no exception. And while there are some spicy fights in here, it never gets unfair. The city itself may be a little disorienting at first, but luckily there are viewscreen camera's to guide the player. What's more, there's a large bell tower in the middle of the city, which looms over the other structures and serves as a handy landmark. My only minor complaint is that some indoor areas are cramped, but luckily these areas don't contain too many enemies.

The map saves the best for last though, with a thrilling and awesome finale which I won't spoil here. Let's just say it's the perfect cherry on top.

Conclusion: this map pushes this old game to its utter limits by creating an entire city and its surroundings, and showing it all on screen at the same time. That's remarkable enough, but it also offers a lot of fun firefights, exploration and memorable moments.There's no reason not to play it, so 98 points is what it gets. 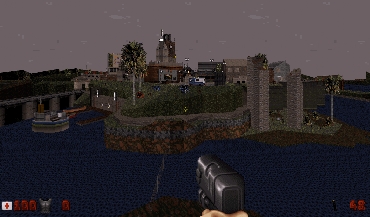 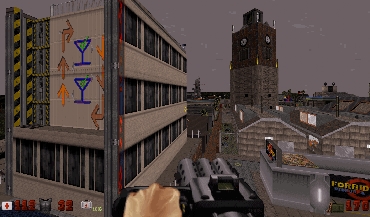 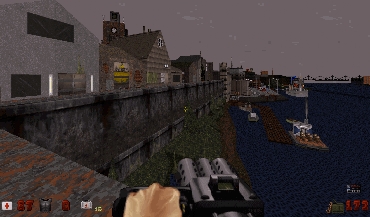 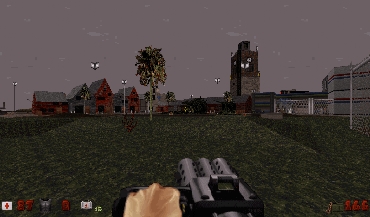